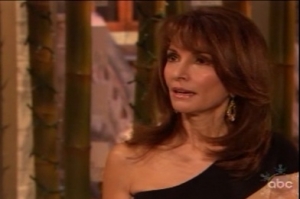 Things are heating up. (Soaps.com)

Last week on All My Children, Jake was faced with some truths, Annie started to crack and some realism crept into Pine Valley. Let’s break it all down, shall we?

The downward spiral?
Annie told JR he was her world last week. How sad. She has a daughter, a job and even a new friend in Amanda. I am loving Annie these days and enjoy the chemistry she has with JR, but I really hate when women are written so pathetically dependent on men. But this is a soap opera we’re talking about, so it’s to be expected. Annie was of course disappointed when JR only gave her earrings instead of an engagement ring as a present. The ink isn’t even dry on her divorce papers. Is she really ready to marry her third Chandler already? JR certainly doesn’t seem to be in a hurry to walk down any aisles, which can probably only mean that breaking Marissa’s Christmas ornament won’t be the worst thing she does out of jealousy.

Kane wisdom.
It’s kind of hard for me to be upset with Erica for being so rude to Jack’s daughter, when I think she’s right. Greenlee has only caused drama, trauma and pain since her return from the dead and she should probably stay away from Kendall right now. I still don’t know why Greenlee has been let off the hook for setting Erica up for embezzlement and for keeping David’s involvement in Erica’s plane crash a secret. Has Jack forgotten his fiancée almost went to jail and almost died because of his daughter and her husband? Apparently so. Surprisingly, I think Erica is the only one who sees things for how they are right now, as she also astutely told Jack that if he really wanted them to be a family, then he should worry about Kendall as much as he does about Greenlee. Erica then gave Kendall some good advice by telling her not to act on her impulse to kill David, but to focus on her boys instead. It’s nice to know that someone is the voice of reason in Pine Valley, but who knew it would be Erica Kane?

Answers create more questions.
The Cara/Jake story continues to get more interesting, as it unfolds at just the right pace. In one week, Cara came to town, saw Jake and revealed that Griffin is her brother, not her lover, who Jake thought she left him for. There's no lurking around town or keeping up ruses just for the sake of dragging out a storyline. Now that we know Cara and Griffin are related, we can enjoy their dynamic more, while wondering what else Jake's ex is hiding. This storyline is hitting all the right notes with me, as aside from what I just mentioned, it's allowing Amanda to be jealous, while still being supportive of Jake, who is angry with Cara, without overreacting. I relate to these people and am rooting for all of them because they are behaving the way most real people would, not like most reactionary, over-the-top soap characters would. What do you think about Cara's confession to Jake? Tell us through our All My Children Poll: Cara's Explanation.

More realism.
Angie's scenes with the woman helping her prepare for her child as a blind person were also relatable. Angie very honestly shared her fears that she wouldn't be able to take care of her baby on her own and that she doesn't feel she can tell Jesse how she feels. I would imagine this is how many women feel when they are confronted with bringing a new life into the world, let alone doing it with the extra hurdle of blindness. Good acting and good writing is all that's really required for a compelling TV show. Primetime proves it over and over again, so why can't Daytime give us more relatable and realistic scenes like these?

Madison also grappled with her pregnancy, as Greenlee and Ryan tried to move forward with their relationship, but I wasn't particularly moved by any of it, so that's all I got this time around. What did you think about last week in Pine Valley? Feel free to share your thoughts below.

Interview: Jacob Young Talks All My...