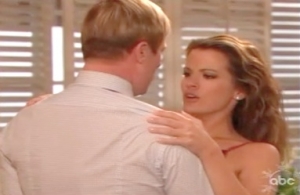 Lori’s All My Children Weekly Wrap Up For December 6 – 10:

Pine Valley was a pretty good place to be last week. Storylines moved forward, there was some entertainment and even some good drama. Of course, there were a few things that bothered me as well, so let’s break it all down…

Saying goodbye.
Alicia Minshew continued to act her butt off last week, as Kendall finally succumbed to having a memorial for Zach. As a fellow former Detroiter and Red Wings fan, I have always loved Thorsten Kaye’s onscreen references to his favorite hockey team, so I adored that they put little Spike in a Wings t-shirt in honor of his Daddy Zach. While that was a high point for me, I couldn’t help but notice the very large headshot of Thorsten Kaye that was on display for the characters to pay their respects to. I think there actually were some candid shots in the background, but for some reason soaps always use headshots for memorial services and just as props lying around characters’ homes. Can’t they borrow some personal photos from the actors to make it more realistic? Or snap a few themselves? It always makes me laugh and kind of takes me out of the scene when I see a framed professional photo on one of the sets.

Plan in motion.
JR really laid his act on thick for Marissa last week when he visited David in the hospital. Knowing Marissa could hear him, JR pretended to make some sort of peace with a comatose David and then turned on the charm and played on their history to get her to soften towards him in regards to AJ. She certainly seems to be buying it, but his plan just can’t end well where Annie is concerned. She’s already getting jealous and I fear she will revert back to her crazy ways. And just when I was liking the new and improved Annie.

Baby daddy.
So, Ryan is going to be a dad for the third time, with a third woman. I actually don't hate that Madison is pregnant because it's a good foil for Greenlee and Ryan's happiness and it could ultimately be good for Madison herself, but really? Who is he? General Hospital's Sonny Corinthos? I know he didn’t actively participate in the first two pregnancies, but after awhile it's just kind of gross. I would like to see this life changing event make Madison a little stronger of a character though, but we'll see what actually happens.

Welcome to Pine Valley.
Just when Jake was making strides in accepting that Griffin was in town, he came face to face with his ex-wife Cara. The scene between Jake and Tad watching a shirtless Griffin talk to Amanda was pretty great. Michael E. Knight and Ricky Paull Goldin have such great chemistry as brothers and it was subtly hilarious when Jake called about a gym membership later on, but I digress. I believe we've heard about Jake's ex-wife since he returned from Africa a couple of years ago, so it's believable to have her finally surface, instead of out of nowhere writing in that Jake used to be married. I'm still a little confused as to how happy and carefree Cara seems to be about the situation, but I am really interested to find out why Cara left Jake in the first place. Clearly there's more going on than we know and Griffin is probably not the bad guy Jake thinks he is since he seemed so concerned about Cara ruining Jake's newfound happiness with Amanda. I'm really glad they didn’t drag out Cara's reveal to Jake and I’m looking forward to learning how her secrets will affect all the players involved.

Progress.
Brot and Natalia made some progress in their relationship as she finally admitted she was scared of love. I found them sweet and charming and hope to see them more frequently with a real storyline, but I had to question their professionalism as they made out during their stakeout. I laughed when Jesse called for a status report and Natalia said there was no activity. How did she know? She was too busy discussing her fear of relationships with Brot and locking lips with him to pay attention to their suspect.

Aside from being severely disappointed they brought David back only to have him lie around in a coma, that's all I got this week. What did you think? Feel free to comment below and vote in our All My Children Poll: Shirtless in Pine Valley.

Video Promo: All My Children's New...