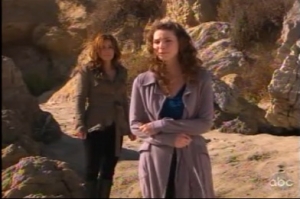 Lori’s All My Children Weekly Wrap Up For November 29 – December 3:

Last week’s All My Children felt pretty ho-hum. There were a couple of major things to happen, but nothing that really excited me. Well, except for my new favorite Pine Valley couple getting busy again. Let’s get to it…

David’s return.
So, David comes back from the dead only to be shot by Erica and left in a coma. I would rather see him running around Pine Valley taunting people without almost dying for real. I mean, what good is a villain if they are out of commission? He also needs to let go of his feelings for Greenlee and pair off with someone as devious as him. I think he and Liza could make an interesting duo.

Innocent bystander.
I’m not entirely sure what the point of Madison getting shot was. It feels like an empty action, which I’m sure will be forgotten within two episodes. She does learn something life altering this week though (to find out what it is check out the All My Children spoilers), which I suppose she could discover due to her hospital visit. If that’s the case, I could think of numerous other ways for her to find out, which would be more realistic and organic.

Scene of the crime.
Greenlee brought Kendall to the beach where Zach’s plane exploded. Once there, Kendall finally took the blame for Zach leaving to help Greenlee. She also received his in-perfect-condition bag that still contained the legible letter she wrote him, despite it being in an explosion and the ocean. Aside from that absurdity, it was pretty hilarious how quickly Greenlee and Kendall got to California from Pine Valley. What was it – one scene? Travel time is truly one of the more comical things about soaps.

Annie and JR go to Washington.
Another couple traveling at the speed of light last week was JR and Annie. Once in D.C. though, good things happened as Annie learned she received her divorce papers from Scott and acknowledged how much she has grown since her last divorce to a Chandler. She then promptly moved on to landing her third Chandler as she and JR hit the sheets in the same hotel where they first had sex. I really do enjoy these two together, as they produce a lot of heat, and I can see them being quite the power couple in Pine Valley. I don't quite buy her as a Chandler executive though so I would like her to find something else to do for a career. I like that they are finally going to try and be a couple, albeit in secret until he can convince Marissa to drop the custody suit. Their carrying on in secret could provide for some fun scenes, but it will also apparently produce a lot of jealousy in Annie, which will probably add a whole new set of problems for the under the radar couple. What do you think of them? Tell us in our All My Children Poll: JR and Annie.

Introducing Cara.
Did you watch Cara the Backstory? While I found Griffin's Backstory added to the intrigue of his character, the one about Cara left me confused and not very interested. After all of the mystery surrounding Cara and the reason she left Jake, I expected there to be more angst in her demeanor. Instead, we meet a peppy and seemingly carefree woman, who acts like she and Jake just didn't work out. It definitely didn't fuel my curiosity. More importantly though, it left me feeling like we were being treated to two different stories. Maybe when we finally meet her in Pine Valley it will make more sense.

I was happy to see Erica continue to try and put her family first, even if shooting David did land her in hot water. And other than wanting more Griffin, as well as Brot and Natalia, that's all that stood out for me last week. What did you think? Feel free to share your thoughts below and vote in our Soaps.com Survey: Your Thoughts On Our Weekly Blogs.