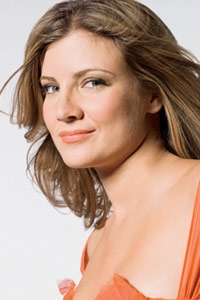 Rebecca Budig Is In! (ABC.com)

We hear casting rumors all the time here at Soaps.com, but it looks like a few rumored AMC casting changes are actually true! Soaps.com has learned that three familiar faces are likely to return to Pine Valley early in 2008.

The first rumor – that Rebecca Budig is returning – is TRUE!

It is official this morning – Rebecca Budig is in as Greenlee and Sabine Singh is out. Soaps.com has learned that the changeover will happen in January. Sabine will last air on January 15th and Rebecca will resume the role on January 16th!

Rebecca Budig originated the Greenlee character in 1999 and the role made her a household name.

Budig was nominated for two Emmy Awards and won a Soap Opera Digest award for her portrayal. Rebecca left the role in 2005 to pursue other projects. She has since appeared in made-for-television movies like “The Perfect Child” and shows such as “CSI”.

Earlier this year Sabine Singh brought Greenlee back to Pine Valley, but fans were slow to accept the newcomer in the fan-favorite role. Now, many fans have accepted the new face of Greenlee. Some are concerned that another change in the character will ruin Greens completely.

Fans are divided on the return of Rebecca. Many feel she is the only Greenlee, however a lot of fans have enjoyed Sabine’s portrayal of the character and say they will miss her.

The second rumor - that a fan-favorite supercouple from the past is returning - is also TRUE!

1980s supercouple Angie and Jesse are returning to the Valley after the first of the year - and their original actors will resume the roles!

Debbi Morgan originated the role of Dr. Angie Hubbard in the 1980s and left AMC in 1986 and since has had a full career. Some of you may remember her recurring role on the WB series "Charmed". In the 1990s this soap vet played Dr. Ellen Burgess on "Port Charles" and from 2006 to 2007 she played District Attorney Jennifer Tartaro on The Bold and The Beautiful". We are being told that Angie Hubbard will return to the Pine Valley canvas in mid-January.

The other half of the Hubbard Supercouple was Jesse, played by Darnell Williams. He is also slated to return to Pine Valley in January, the question is how will Jesse's reappearance be explained? Many fans will remember that Jesse Hubbard was killed and died in Angie's arms. So fans are wondering how the writers will explain away the rebirth of this favorite character. Fans are also curious if Angie and Jesse will have ties to a certain hip-hopper (Dre) who recently arrived in Pine Valley with a big secret.

Welcome back to these amazing daytime actors!!

AMC Actors: Where Are They Now?