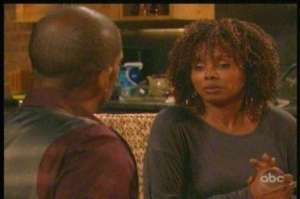 The show this week had some fun stuff going on with my favorite Pine Valley people but the really big deal was Greenlee’s trial. I have some thoughts on my friends and ne’er do wells. Let’s go.

Finally!
The most emotional moment for me this week was Angie finally getting angry about her blindness. She’s usually all light and bubbly and recently her character has lacked depth. The intense emotion between her and Jesse was really sweet and reminded me of how much more complicated they used to be. Although we’d all like to blame dead David for everything wrong in the world, I didn’t really buy the theory that her blindness was his fault. Angie is a good doctor and I don’t think she would have breached protocol unless the writers scripted it, which in this case they did.

Nice man in the mansion?
Oh JR! I don’t think he loves Annie. He lusts for her for sure, but love? No. Why would he even want a nut job like her? She whined and cried all week. And poor little Marissa, the quiet, wouldn’t hurt a flea girl. She doesn’t seem to be sexy enough to hold JR. If she’s ever sexy, we sure don’t get to see it and apparently JR doesn’t either. I like Marissa, don’t get me wrong. I just think she could have livened things up for him and us. I can’t help thinking that JR has something up his sleeve. He was such a nice guy after his cancer scare and now he’s turned into a sleazeball. Is there anyone in the show that he’s not fighting with? With Stuart dead and Scott in jail I guess AJ is the closest thing to a nice man in the mansion. The Chandler boys go from good to bad and back again more often than I change my underwear. There will be some fireworks next week when someone catches JR and Annie together. I can’t wait for that! What are your thoughts? Please take a moment to vote in our Poll: JR And Annie.

Objection Your Honor!
Well Liza was fighting truth the American way like Superman, well Superwoman. However Jack seemed to have the upper hand in the courtroom and shut her down quite a bit. I think he parallels Jesse for seeming to never do too much, but in this case we know he has a plan. However, I find it hard to believe that you would defend your daughter and not let her in on how you plan to defend her.

Zach is back!
It was great to see Zach’s beautiful face again but his return was anything but satisfying. Knowing that he didn’t move with the show (this is not a spoiler) I for one don’t think he’ll be around very long.

Argh!
This Ryan/Greenlee thing - please make it stop! They are so very boring together. There’s no spice left in that relationship for me for sure. Does anyone want them to be together? Ryan is playing both sides of the coin. He says he loves Madison but then he’s kissing both her and Greens. Perhaps if he does go off with Greenlee, Madison will go on another man-killing spree. Wonder if she’ll take up with Annie? Maybe Amanda too? There’s a trio I’d like to see work together.

Kiddos.
Earlier this week it was nice to see all of the little ones playing together on the show. It’s so typically soapy and unrealistic that the adults are running all over the place and the kids are always in their rooms. I’m sure glad they recognized their mommies.

Mountain Man turned G.Q.
I really like Caleb. I think he will give Jack a run for the money in the long run. Erica’s spark and spontaneity would be a lovely challenge for thoughtful, quiet and strong Caleb. They obviously have chemistry and I think a love match would be awesome. Jack deserves a better partner anyway. We all know she’ll break his heart one day just like all the rest. There’s a storyline brewing with Caleb and I’m looking forward to learning more of his secrets.

Feel free to share your thoughts below and follow Lori, who will be back next week, on Twitter at @LoriKWilson for all the latest All My Children scoop. Soaps.com is also on Twitter @soapoperafan, and Facebook. Join us for extra scoop on all the other soap operas, Glee, Grey's Anatomy and Vampire Diaries.

All My Children Video Promo:...