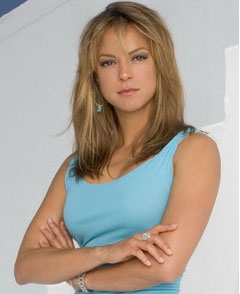 Using her fame for good.

Eva La Rue (ex-Maria) has been named the National Spokesperson for the Beckstrand Cancer Foundation, whose aim is to improve the quality of life for cancer patients and their families. For thirty-six years, the Beckstrand Cancer Foundation has financially assisted patients and families in Southern California, allowing individuals to continue their treatments uninterrupted.

The actress comes to them as an active supporter of cancer-affiliated causes, as she has lost both her grandmother and great-grandmother to the disease. Part of her responsibilities as the spokesperson will include being the face and voice of the Foundation, as well as raise awareness for the needs of cancer patients via national media outlets. She has already helped raise $1.1 million at the Foundation’s seventh annual Diamond & Pearl Ball on October 16.

To find out what other actors are up to outside of Pine Valley, check out the All My Children News Room. We invite you to join Soaps.com on Twitter @soapoperafan, “like” Soaps.com on Facebook to dish on All My Children, all the other soap operas, Glee, Grey’s Anatomy and Vampire Diaries!

All My Children Poll: Thoughts On...

All My Children Alums Mark Consuelos...