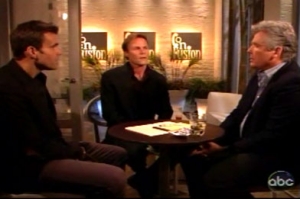 Just about everything in Pine Valley last week revolved around Greenlee’s trial beginning and Scott going to prison. There was quite a bit going on, so let’s get to it.

Not so innocent.
I’m really having a hard time with everyone in town rallying around Greenlee. Kendall and Bianca should still be giving her the cold shoulder considering what she did to their mother. I was pretty happy Erica pointed that out to her daughters. And Ryan is just a sap, whose motivation for sacrificing his own freedom for Greenlee’s is pretty unclear to me. He doesn’t know he killed David for sure, so what good does it do to land himself in prison? What do you think about all the sympathy Greenlee is garnering? Tell us in our All My Children Poll: Thoughts on Greenlee.

Convenient witness.
I don’t trust Nick Pearson, who saw Ryan the night of David’s murder and heard him muttering that someone needed to die. It’s all too pat, which makes me think he is a plant put in place by David, who will eventually resurface. This is in no way a spoiler, just a hunch. What do you think? Tell us your thoughts on Nick Pearson through our Poll Archives.

On the fast track.
It's so typically soapy that Damon was a busboy a week ago and now he's accompanying Liza in court. I thought he was just her file clerk, but now he's practically her second banana. I wonder if his newfound respect for Liza and what she "goes through to be her," will inspire him to become a lawyer as well. If so, he'll probably pass the bar exam next month.

Not a threat.
I'm enjoying Erica and Caleb's banter as they work together to get Cortlandt Enterprises back, but I'm not seeing any romantic sparks. I think they have a wonderful rapport, but as friends and business associates, nothing more. She belongs with Jack and I hope the writers allow them to face things as a couple for awhile.

Gone too soon?
Just when I was starting to like Scott, he got shipped off to prison. I feel like he finally showed some backbone and fire when he was saying his goodbyes to everyone. He didn't sugarcoat anything, he told it like it was and he made peace with everyone. He was especially impressive when he declared he wouldn't let Erica manipulate him when it came to JR. If only he was this aware and bold before, I would have liked him a whole lot better.

The last available Chandler.
So, what will Annie do now? It's pretty safe to assume she will freak out considering her husband is gone and all her asserts have been frozen. She's sort of free to be with JR now, but will that actually happen? I know soap characters have gone through all the men in the same family before, à la Reva Shayne on Guiding Light, but it'd be a little gross and tacky if she hooked up with JR now for real. I'd like to see her hold out hope for her and her husband, at least for a little while. Like until December when Daniel Cosgrove returns as Scott Chandler to reclaim his past role.

That's it for me this time around. What did you think about last week in Pine Valley? Feel free to share your thoughts below and follow me on Twitter at @LoriKWilson for all the latest All My Children scoop. Soaps.com is also on Twitter @soapoperafan, and Facebook. Join us for extra scoop on all the other soap operas, Glee, Grey's Anatomy and Vampire Diaries.