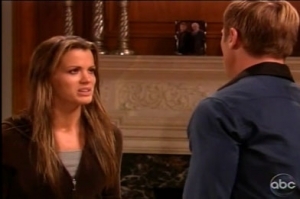 Kendall Needs Something To Do. (ABC)

Ally’s All My Children Weekly Wrap Up For October 4 – 8:

This week Annie and JR finally got it on again, JR channeled his inner father and Erica and Jack returned. It was a week of building stories in Pine Valley and some of it was great.

A hot mess!
Erica and Jack returned from their whirlwind trip back to Pine Valley this week. Why is it whenever characters return to this town they always return to a disaster? Remember when Kendall awoke from her coma to discover Zach fathered Gabby? Poor Greenlee came back from the dead to discover Erica was shacking up with Ryan. Now Jack and Erica return to find Greenlee is in jail for murdering David, and Kendall is jeopardizing her marriage to help Greenlee. I’d be a little annoyed with Kendall if I was Erica. After all, Greenlee had a hand in Erica’s plane crash. Attempted murder takes awhile to get over. While Jack and Erica seem to be happy, it seems like this couple is headed for a collision with Caleb and Krystal. Both Caleb and Krystal have been flirting with one another for awhile now, but will be working with Jack and Erica. Something tells me Krystal was right about herself, she’s a hot mess and these couples could be, too.

Let’s get it on.
JR and Annie have been fighting their attraction to one another for awhile now and finally gave in this week. Good for them. How much longer were we expected to watch these two stand across a room from one another basically panting, and obviously wanting to jump one another’s bones? I’m surprised Scott discovered them so quickly. Annie pointed out that she forgave Scott for sleeping with Marissa. That’s true, but they are married now. At least Annie admitted that while she loves Scott, she can’t stay away from JR. I almost wonder if JR and Annie actually made a go of it if they would get bored with one another and the attraction between them is knowing they can’t have one another. What do you think Annie’s next step should be? Vote in our All My Children Poll: Annie’s Next Step.

Broken Record.
Kendall told Greenlee that without Zach, she has no one to hang out with but her. That’s really sad. Her kids might have something to say about that. Kendall needs something more to do than follow Ryan and Greenlee around.

Our Father’s sons.
JR was definitely vintage Adam this week. It’s been fun to watch him change into his father and take charge without worrying about who he hurts. He warned Krystal that anyone who crossed him would be hurt. Definitely like Adam! I’m wondering how Asher will figure in all of this. He told Colby that a little bit of mystery is good. We don’t really know what he is up to for sure. Will Asher follow in Palmer’s footsteps and set up a JR/Asher feud like the classic Adam/Palmer clash?

This and that.
Damon took a job with Liza. Seriously? This can only be trouble, but I’m excited to watch it unfold. I liked the scenes between Jesse and Angie and how he tried to understand how she is feeling with her blindness. However, I think Angie is being a bit unrealistic in thinking she can be the chief of staff. I would think a condition like this would take awhile to adjust to and running a hospital can’t be easy on top of it. Finally, Madison and Ryan talked about her previous manipulative ways. I’m glad she admitted she wasn’t always an angel. I’m just wondering if she’s really changed. For storyline purposes, I’m hoping there’s still a bad girl in there!

Thanks for reading my thoughts this week! What did you think about last week in Pine Valley? Lori will be back next week. Feel free to share your thoughts below and follow Lori on Twitter at @LoriKWilson for all the latest All My Children scoop. Soaps.com is also on Twitter @soapoperafan, and Facebook. Join us!