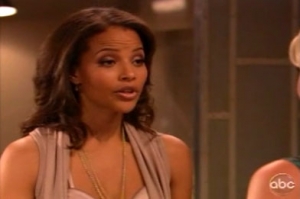 Lori’s All My Children Weekly Wrap Up For September 27 – October 1:

Last week an arrest was made, women got fierce, and a family connection was revealed. Of course other things happened as well, so let’s get to it.

Still a good girl.
Last week’s video promo was pretty misleading, as they made it seem like Madison maliciously told Liza Greenlee declared she wanted David dead. It turned out Madison just blurted it out in order to protect Ryan and it seemed like she felt bad about it afterwards. I was a little disappointed by this, as I would have preferred Madison fighting dirty. When Kendall found out what she did, she ordered Madison to retract her statement with Liza. Even though I wanted Madison to manipulate things as a bad girl, I’m pretty tired of everyone bending the law out of some ‘greater good’ and acting like it’s perfectly acceptable. Not to mention, I think Kendall should still be furious with Greenlee for what she did to Erica, instead of looking out for her well-being.

Handled with kid gloves.
Kendall wasn’t the only one to coddle Greenlee, as both she and Ryan did all they could to help and protect their friend as she was carted off to jail. Even Brot stayed after his shift so he could offer to help get her settled in her cell. That’s some service the PVPD offers. Thankfully, Jesse wasn’t on this bandwagon and had an exasperated reaction to Kendall asking if she could accompany Greenlee to her cell.

Staking her claim.
Randi didn’t pull any punches last week with Madison. She actually told her she’d ‘cut’ anyone who got between her and her man. I wasn’t sure I heard that right, but everyone was all abuzz about it on Twitter. I loved that she didn’t get all crazy on Madison though, but instead she very sternly and forcefully told her to back off Frankie. The only thing missing was a scene between Randi and her husband.

Father and son.
So, Asher is Caleb's son. Not much of a surprise, but this could get interesting especially since he's also related to JR and they're working together against the newest Cortlandt. I would like a little background on Asher and his mother though to help me understand this intense rage he has towards Caleb, considering he's never met him. Maybe Caleb doesn't even know about him. I wonder how Palmer knew about Asher though and why he all of a sudden instructed him to find his father in Pine Valley. Good thing Caleb actually followed Uncle Pete's last wishes.

Game face.
Annie was on fire last week. She didn't back down from JR's creepy behavior when he found her in a towel in her bedroom. She looked him dead in the eye, dropped her towel and told him to take a good long look. I was pretty impressed with her bold attitude. Of course, JR really did get to her and Scott had to jinx things by asking her what could possibly go wrong with her party. Doesn't he know that's the kiss of death on a soap?

Baby steps.
Brot and Natalia went on a picnic in the park together and he was impressed upon learning she could cook. I was more impressed that she actually had the time to whip up such an elaborate meal considering she's either at work, worrying about Angie, or butting into Frankie's love life. Despite Natalia's insistence nothing was going on between them though, they shared an awkward kiss at the end of Friday's episode. The promise of more things to come I hope.

On their way back.
Erica and Jack return from their whirlwind vacation this week, which should shake up more than a couple of storylines. Are you excited for their return? Vote in our All My Children Poll: Jack and Erica's return.

That's it for me this time around. What did you think about last week in Pine Valley? Feel free to share your thoughts below and follow me on Twitter at @LoriKWilson for all the latest All My Children scoop. Soaps.com is also on Twitter @soapoperafan, and Facebook. Join us!

All My Children: Vincent Irizarry...