Therapy.
Bianca and Kendall were there for Marissa to help her vent her frustration over David's death by encouraging her throw things around her father's room. Their tactics worked and Marissa felt a little better. I truly enjoyed the female bonding that was displayed, but I'm not really sure why these particular women came together. I guess Marissa really has no other friends.

NuScott.
Word came out that Daniel Cosgrove has been recast in the role of Scott Chandler. Cosgrove portrayed Scott in the nineties, but I don't think he made much of an impression on me. I actually don’t think Scott has ever really made an impression no matter who was in the role, but I hope that changes and that Cosgrove gives Scott the backbone he's missing right now to truly go to toe to toe with JR and even his wife Annie.

Gone too far?
Asher upped his game with Caleb by hitting him over the head and stealing some papers from him for JR, who was only impressed until he learned of his tactics. This led to JR wanting to know more about Asher and who he is, which he will learn next week. The reveal really shouldn't come as too much of a surprise, but hopefully the fallout will be full of juicy stuff.

That's it for me this time around. What did you think about last week in Pine Valley? Feel free to share your thoughts below. Don't forget to vote in our Least Likely to Succeed Poll and follow me on Twitter at @LoriKWilson for all the latest All My Children scoop. 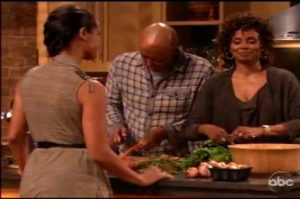 Lori’s All My Children Weekly Wrap Up For September 20 – 24.

Last week a new suspect emerged in David’s murder investigation, Angie leaned on a couple of friends, and we learned Scott’s getting a new face. Of course other things happened as well, so let’s get to it.

A little help from her friends.
My favorite moments last week involved Angie. I enjoyed her conversation with Brot who tried to help her deal with her frustrations about going blind. It was also fun to watch Angie observe Brot and Natalia’s flirtatious banter while they all made dinner together. It was a good combination of serious and lighthearted scenes. Later in the week, Tad helped brighten Angie’s mood when she worried Jesse was tiptoeing around her. Michael E. Knight and Debbi Morgan share such an easy rapport you really believe they are friends.

Finally getting somewhere?
As for Brot and Natalia, their banter last week was fun and I felt the sparks between them. The All My Children spoilers say we’ll be seeing more of their relationship in the next couple of weeks, which I am looking forward to, as J.R. Martinez is getting more and more comfortable as an actor and it’ll be nice to see him in a romance that hopefully works.

Off limits.
Frankie and Madison’s relationship is really staring to get to Randi, and who can blame her? Nothing might have happened between them, but no woman wants to see their man that friendly and comfortable with someone else. I’m wondering if Frankie’s friendship with Madison will become more of a problem since he wants a baby and Randi doesn’t. I could see him turning to Madison to vent over the situation, which would probably not sit too well with his wife.

Multi-tasker.
When did Greenlee have the time to whip up those fake letters from David? I think it’s generous that she was trying to give a few people closure, but I’m a little annoyed she also wrote them to get Ryan off the hook for her husband’s murder. I have to give Rebecca Budig kudos though because she did make me feel sorry for Greenlee, as she struggled all week with her feelings, but I’m not such a huge fan of the Greenlee/Ryan show. A vial of Digitalis was also found in her glove compartment, which means Greenlee has just jumped to the top of the suspect list and it only goes downhill from there. 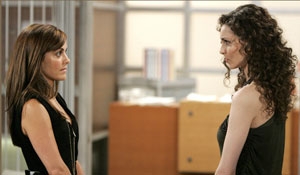 All My Children Saturday Teaser Poll: Caught On Tape

All My Children's Susan Lucci On The Wendy Williams Show. (Video Update)