Fessing Up.
I was disappointed Kendall and Bianca didn't have a more reactionary response to learning Greenlee almost got their mother sent to prison and basically helped David cover up the fact that he sabotaged her plane. Even though they are preoccupied with Ryan's legal issues, I would think they could have made time to press charges against her. What do you think? Vote in our All My Children Poll: Bianca and Kendall's reaction. I was also confused when Kendall talked to Ryan about this and he seemed to know everything Greenlee had done. I don't exactly recall Greenlee confessing everything to him and if she did, why wasn't Kendall furious with Ryan for keeping that secret?

Cause of Death.
David was revealed to have been poisoned and not beaten to death. This got Ryan off the hook for about two seconds before Greenlee found the vial of Digitalis that caused David's death in his coat pocket and Kendall discovered the drug was the last thing Ryan searched on his phone. All very convenient. It really felt like David set this whole thing up to make Ryan look guilty and I'm really expecting him to come back from the dead at some point to reveal this, but for now, Greenlee and Kendall are conspiring to keep these tidbits from Ryan. It's all very ridiculous though as Ryan probably would have discovered both things on his own before super sleuths Greenlee and Kendall did. It's bad enough they were treating Ryan like a child by keeping their discoveries from him, but then Greenlee suggested planting the vial on the as-far-as-we-know innocent Liza. On what planet would that be okay, especially after what happened with Erica? I was happy to hear Kendall shoot that idea down.

Mourning the Dead.
There was a nice Leo sighting via photo when Greenlee went to David's grave and later tried to decide what to do about Ryan. However, I'm not so sure Leo would be all that understanding if Ryan was the one to kill his brother, as Greenlee suggested. I think she was right, she was just projecting her instinct to protect Ryan on her dead first husband because unless I'm not remembering correctly, Leo and David had a fairly decent relationship.

The rest of Pine Valley gathered to celebrate David's death in order to get him out of their lives for good. They met at Krystal's and ran down the list of David's evil deeds. Sort of hypocritical considering no one in that room was as squeaky-clean as they were pretending to be. At least Ryan didn't feel the need to participate and Angie took the time to pray for the deceased.

That's it for me this time around. What did you think about last week in Pine Valley? Feel free to share your thoughts below. 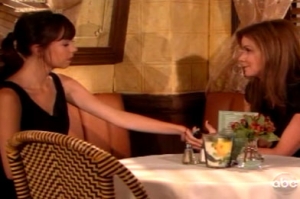 Credit: On the case. (Soaps.com)

Lori’s All My Children Weekly Wrap Up For September 13 – 17.

Last week gave us some interesting casting news, a revelation, a confession, and a party for the deceased.

Casting Shake Up.
The big news last week was that Brittany Allen and Adam Mayfield have been let go from All My Children. I can’t say I’m too disappointed, as Marissa and Scott haven’t exactly lit Pine Valley on fire. There’s no definitive word on whether or not the characters will be written out or recast, but I think the show could live without Marissa. Scott on the other hand has possibilities, as he continues to battle with JR and could be a true force to be reckoned with if recast correctly. Since As The World Turns is over now and Eric Sheffer Stevens (ex-Reid Oliver) was the best thing to happen to that show this past year, I would like to see him take Scott in an edgier, darker, more dynamic place. His commanding presence would definitely compliment Caleb’s now that he and Scott are teaming up.

The New Kid on the Block.
Asher did his best to ingratiate himself with JR by hacking into Caleb’s computer for crucial information. This seemed to impress JR and he said he might be able to use Asher for more than just hacking. This could lead to interesting things, but I really just want to know who Asher will more than likely end up being related to and hope the writers take him in a compelling direction because he’s definitely growing on me.

All My Children Saturday Teaser Poll: Hit Over The Head 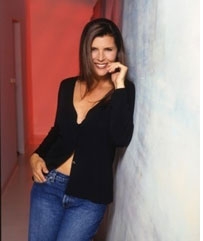