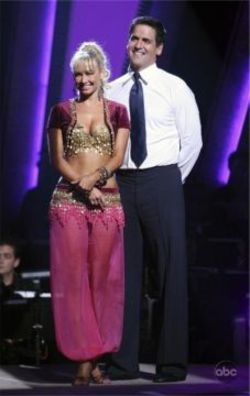 Cameron is dancing into Week 7! (Soaps.com)

He’s been a sexy dancing fool for six weeks now, and this week Cameron Mathison became one of only two male stars left in the “Dancing with the Stars” competition. With all of the other male teams voted off by America the only men left are Cameron and partner Edyta Sliwinska and Helio Castroneves, an Indy car driver, with his partner Julianne Hough.

Mark Cuban, the last male to be voted off (in Week 5) was recently interviewed by RealityTvMagazine.com. Mark gave them the scoop on the competition and who he thinks will win it all.

Here is a portion of that interview:

Reality TV Magazine: Now that you are out of the competition, who do you think will ultimately win Dancing with the Stars 5?

Mark Cuban: Cameron. He is getting better and better, and he has great comic timing, which makes for great interviews. That is of course unless all the Cheetah fans out there learn how to create 200 email addresses each and spend all morning voting.

You can read the rest of Mark's interview - and find out about the celebrity installment of Donald Trump's "The Apprentice" by clicking here.

Will Cameron win it all? We'll have to wait and see but this week was another good showing for Cameron and Edyta. They drew a Samba and earned 25 points from the judges. Each week the judges have noted how much Cameron has improved in his dance technique and showmanship, which is a very good sign.

Last night was a surprising finish. For the first time Cameron was in the bottom two according to America's vote. He got lucky, though, and Cheetah girl Sabrina was voted off instead. So Cameron is now dancing into Week 7!

Soaps.com has been following Cameron on "Dancing with the Stars" since opening night. You can catch up on all of his dances and find out how he is doing by clicking here.

Up Close and Personal with AMC's...