Missed Plot Point.
I truly wish they would play the beat of Greenlee feeling guilty about what she actually did to Erica, especially when she's around Ryan and Kendall. Right now all they are showing is her trying to get out from under David's blackmail. While she didn't actually tamper with Erica's plane, she did know that David did and she had the idea to set La Kane up for embezzlement. It would be more believable if she showed her fear of Ryan finding out she's not the innocent damsel in distress he's making her out to be, instead of just playing that part.

Embracing His Inner Cortlandt.
Caleb continued to charm the women of Pine Valley last week. He was pretty cute playing 'mean' with Miranda, who saw right through him, and he and Bianca are forming a nice friendship. He even bonded a little with Kendall, telling her how much she reminded him of her mother. He's clearly taking over Palmer's role with the Kane women and he is even taking his uncle's last name. He has also befriended Angie and continues to grow closer to Krystal, two more relationships I'm enjoying. However, while I know he was rude to Tad right out of the gate, I wasn't entirely sure why Tad treated him with such hostility. I'd much rather see them form a reluctant alliance that will eventually turn into a respectful friendship.

Comic Relief.
I'm pretty sure it was unintentional, but Annie calling JR immediately after having sex with her new husband, while she was still naked in bed, so they could meet up was pretty funny. Did she really need to tell JR for the hundredth time at that moment that she had chosen Scott and that he needed to stop acting so jealous? I'm pretty sure he got the point when she said 'I Do' to someone else.

Odds and Ends.
As previous spoilers have suggested, I can't wait to find out what Jake's secret from his past is that involves Kendall.

I am liking Asher and look forward to learning more about him as his story unfolds.

I wish we'd see more of Randi interacting with Frankie and Madison. Whether she would be jealous, or understanding of their friendship, I just want more of the next generation of Hubbards. Although, the shot of Frankie looking guilty at the party was intriguing.

That's it for me this time around. What did you think about last week's AMC? Feel free to share your thoughts below. 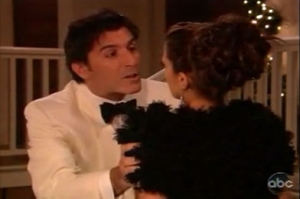 Credit: A softie at heart. (Soaps.com)

Last week on AMC, Caleb threw a party and David died. Other things happened too, but they paled in comparison.

The End of the Devious Doc?
After physically fighting with Ryan and throwing a few threats Greenlee’s way, David stumbled into Caleb’s party and collapsed. I have to give kudos to TPTB for keeping the secret about who would die for as long as they did. Sometimes it’s more fun to speculate and wonder than it is to know every detail so far in advance. While those same powers-that-be told the soap press that David is truly dead, his portrayer Vincent Irizarry’s Facebook page says he is in the middle of contract negotiations. So what’s the real deal? We’ll have to wait to find out, but while I am tired of characters coming back from the dead and feel this was actually a pretty good twist, I truly hope he’s just faking his death to exact his revenge. He is Pine Valley’s only real villain right now and I don’t think AMC can really afford to lose any more strong fan favorite characters in the wake of losing Adam and Zach on a permanent basis. I know some of you want David gone, but from the response his death has gotten, it seems the majority of the fans want him to stay. He’s a love-to-hate character and even though he can be too much of a mustache twirler at times, if he leaves, there is no one on the canvas to effectively fill the bad guy void. Besides, if he is dead, what will Ryan and Jesse do with all of their free time if they aren’t trying to bring David down? I was also really hoping to see something develop between him and Liza. That’s my opinion on the matter, what do you want to see happen? Tell us in our poll about David’s fate. 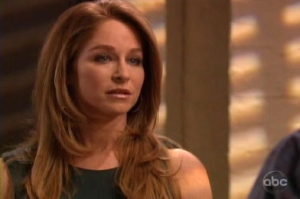 All My Children's J.R. Martinez Joins Rehabbing With The Troops. (Video Update)