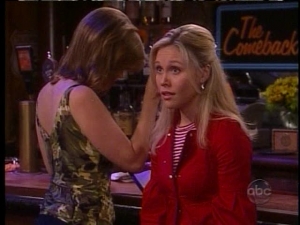 The “nuBabe” landed in Pine Valley just over a week ago and so far fan reactions have been mixed.

Much of the distress of fans seems to be the way the change-over happened. In Alexa’s last scene Babe hugged Krystal, played by Bobbie Eakes, and when she pulled away from the hug, Amanda Baker was in the role of Babe. That startling transition was very new for soap fans who are used to recast actors simply being introduced by a voice-over.

Here is what a few fans have had to say.

Willlldcat80 said, "I want to like new-Babe, but I just don't. I don't think it's her fault but Alexis created Babe, she is Babe, and putting her immediately into a crap storyline with Wes/Richie makes it even worse."

Jooo said, "Sad to see her (Alexa) go, Iam going to try to give the nuBabe a chance, but let me tell you, it will b hard."

Mrfraser said, "All I can say is that when I look at her I see Joline, the killer on Night Shift (Amanda Baker's last role), sorry. But she is going to have to grow, grow, grow on me before she is the new BABE."

Some fans are in favor of giving Amanda a little room to grow as Babe.

PineValleyBreeze1 said, "Let us all give her a fair chance. I don't like the way they brought this actress onto the show, and I'm pretty sure SHE didn't either. They should have had Babe leave town for awhile and THEN bring in the new actress. But here we are....NEW Babe!"

BrianLovesSoaps said, "I am a HUGE Babe fan and I just know this recast is gonna take awhile for me to digest."

Soaps.com has gotten several emails from fans asking what happened to Alexa. She and real-life husband Justin Bruening, ex-Jamie, have moved to the Los Angeles area and are pursuing their careers there.

Alexa is set to appear in two movies in 2008. The film 27 Dresses is in post-production; the film stars Katherine Heigl of "Grey's Anatomy" fame. Alexa will play a bride. The second movie, Old Dogs, is currently filming.

We wish Alexa the best of luck with her career. She will be missed! At the same time, we welcome newcomer Amanda Baker to Pine Valley and hope she is around for a long time to come. The change in actresses for the part will likely change the character quite a bit and we're looking forward to seeing more and different sides of Babe in the coming months.

AMC Actors: Where Are They Now?...