Facing the Music.
I'm glad Liza fessed up to everything and she's now experiencing the fallout of sabotaging her daughter's boyfriend. Liza was left in tears as Colby basically disowned her mother, but what did Liza expect when she plotted to seduce Damon and replaced his ADHD medication with placebos? Tad has also turned his back on her, but at least she has Krystal, who has no room to judge considering she once sold her daughter.

JR and His Women - Spoilers Included.
JR discovered that Scott stole the nanotech project from Palmer, but he called Annie to discuss it instead of his cousin. It made no sense except that he just wanted to be near her. That seems to be the case, as earlier he told her he didn't want to watch her walk down the aisle to another man. He also broached the subject of kids with Marissa last week, but she thankfully told him they were in no position to do that. She also dug her heels in about taking the job Caleb offered her. Caleb probably did only extend the offer because he knew it would tick JR off and he might get some inside info on him, but I was happy to see Marissa develop a backbone. Next week she does something else surprising and if you don't want to know what it is, then stop reading here. It seems after Marissa gets the wrong idea about JR and Annie, she sleeps with Scott. It will certainly add a new layer to this story, but I can't decide if I like this or not yet. I do have to wonder though if Marissa will end up pregnant.

Embracing Her Situation.
Greenlee tried to play David but found it might be better for her legally if she stayed with her devious husband. I for one would like to see that happen and for them to rule Pine Valley together with a scheming fist. It could be great fun. It should be interesting to see how Kendall's return plays into this storyline, but I'll of course have more to say on that next week.

That's it for me this time around. What did you think about last week's AMC? Share your thoughts below and vote in our poll about your favorite female performance. 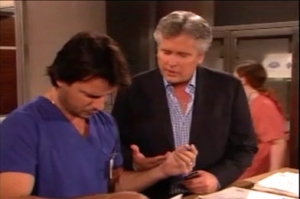 Credit: Not the news she was hoping for. (Soaps.com)

AMC really mined its history last week, while also laying the groundwork for things to come.

Good Stuff.
You could really feel the show’s history on Friday. Angie talked about her life with Jesse to Jake as she discussed her predicament, while old friends Tad and Jesse reminisced as they caught each other up on their respective lives. Aside from Jake and Liza, they are the same actors and characters and it’s pretty cool that they are still around to remind of us of the rich history they do share. It would have been fantastic had Marcy Walker returned in the role of Liza, but Jamie Luner is doing a good job of making the role her own. As for Jake, the character never really made much of an impact in the past in my opinion and Ricky Paull Goldin is so wonderful in the role it doesn’t matter that he didn’t originate it. I really think AMC has been doing a good job of giving viewers what they really want out of soaps with these characters: stories based on past history, deep friendships, family and love.

The Martin Men.
Michael E. Knight has really been great as Tad, playing a more serious side as he deals with Liza’s betrayals and attempts to bond with his son Damon. I also loved his scenes with Jake as he tried to talk to his brother about Damon, but Jake took a more lighthearted approach. They have such great chemistry together. Tad and Damon’s conversation was equally as good when Damon came home, as it had the right mix of sincerity and awkwardness. I hope the powers that be are thinking of bringing Jamie back so he can meet his new brother, but in reality, wouldn’t Damon be older than Jamie? 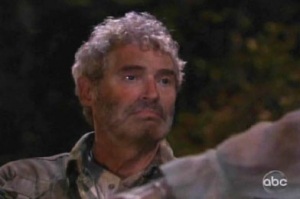 All My Children Saturday Teaser Poll: Caleb Gets A Makeover

All My Children Video Promo: Banding Together