Speaking of David, I kind of enjoyed watching him make Greenlee squirm last week. How she thought he would just let her go is beyond me, but it's been kind of great to watch as she realizes the reality of her situation.

Looking After Emma.
Since Ryan's been in the hospital, Madison has apparently been helping to take care of Emma. It's really nice of her, but why isn't Annie looking after her own daughter? She had her when Ryan went to New York, so why not while he's in the hospital too? I guess getting a PR job with no experience and lusting after your ex-son-in-law while trying to marry his cousin is too time consuming.

Off-Screen.
Brot was on for all of five seconds last week to inform us he would be checking into the hospital for eye surgery, as his portrayer J.R. Martinez did in real life. I assumed it meant he would be off-screen for awhile, but since we never see him anyway I'm not sure why they felt the need to slip that in. Unfortunately, Brot's absence from the canvas is not anything new. I liked that Natalia asked him all kinds of questions about it and said she was curious because she cared about him. But, again, if he's going to be off-screen, why tease us with their relationship if he's not going to be on for a while? It would be great if I'm wrong and they do play out the story, leaving him onscreen and having Natalia help him while he recovers.

Softening Up.
I loved Caleb's scenes with Bianca and Miranda. There's just something about a gruff old man getting charmed by a little girl. It was amusing as he tried to figure out what a tweet was and so cute when he got schooled by the little girl. I look forward to seeing more scenes between them.

Saving the Day.
J.R. came to Annie's defense yet again last week when she talked to Adam on the phone. After she got upset from the things he was saying, JR grabbed the phone and defended her to his old man. I’m a little tired of JR coming to her rescue and her playing the victim, because she is not one. She's a tough manipulative chick, who doesn't need JR fighting her battles.

That's it for me this time around. What did you think about last week's AMC? Share your thoughts below and vote in our poll about the best male performance. 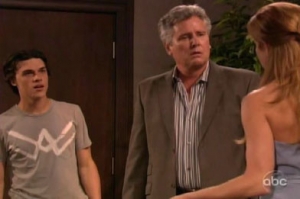 Last week’s AMC was pretty entertaining, as it gave us many great performances, a couple of long awaited reveals, a little blackmail and the possible beginning of a great friendship. But as much as I enjoyed the week, there were of course a few things I questioned.

Smart Man.
I am so glad Tad saw through Liza’s lies and believed Damon about the photos and how Liza tried to seduce him to keep him away from Colby. I thought the scenes between Michael E. Knight and Jamie Luner were truly great. I did laugh though when Tad and Liza individually went out looking for their kids, but couldn’t find them. Isn’t Krystal’s restaurant the first place you’d look for someone in Pine Valley?

Truth Revealed.
Angie finally broke down in front of Jesse and told him she couldn’t see on Friday. That was the cliffhanger, but it looks like she tells him everything next week. I’m glad that secret is out, mostly because I really couldn’t understand why she wouldn’t tell her husband that crucial piece of information. Now there’s a new wrinkle, as she just found out she’s pregnant and the medication she’s taking for her failing eyesight could harm the baby. I like that there’s added drama, but I’m not so sure I want to watch Angie and Jesse raise a baby. I like the couple they are now and wish the writers would have found some other way for Angie to struggle with the decision of whether or not to take the medication.

Easy Fix.
If Ryan is so intent on getting David out of Greenlee’s life, all he has to do is tell the Feds David is bribing the SEC dude. It really makes no sense why he didn’t already alert a law enforcement agent to that little tidbit. And what happened with that? Is my memory failing or did they totally drop that whole issue? David confessed to setting Erica up with the Miranda Center scandal and bribed the guy so he wouldn’t go to jail, and then nothing. I would think he would be required to go through the motions of a trial or sentencing or something. At the very least, Erica or Bianca should be outraged that David didn’t go to prison for creating the scandal and demand some justice. It just seems to have been forgotten. 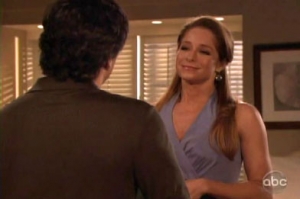 All My Children Saturday Teaser Poll: Liza Admits All

All My Children Video Promo: Kendall's Back!