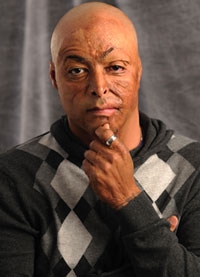 Today on All My Children, Brot told Natalia he was checking into the hospital to have eye surgery. In a case of art imitating life, his portrayer, J.R. Martinez, did the exact same thing.

J.R. described his problem, which required the surgery that seems to have occurred sometime in June, via Twitter. He stated the operation was to fix his bottom left eyelid, which pulled down because of his burns. It wasn’t covering his eye, so the operation was performed in order to pull it up.

He further explained, “This surgery isn’t a cosmetic surgery to be better looking. It’s strictly for function & to prevent my eye from drying out & losing vision.”

His ensuing tweets have indicated that he is recovering just fine, but he had to wear an eye patch for awhile.

In a recent interview with the Pittsburg Post Gazette, Martinez said he was done having surgeries on his face as he has learned to accept the way he looks now.

All My Children's J.R. Martinez At...