The familiar faces of All My Children 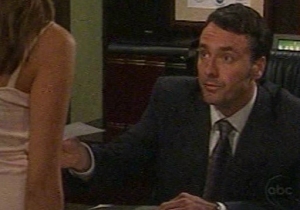 We all know Erica, Palmer, Zach and Greenlee. But what about those other faces we see on the Pine Valley canvas? What about Rachael and Kyle and even those visiting doctors? Just because they aren’t in Pine Valley for long periods of time doesn’t mean we shouldn’t know a little more about them.

Soaps.com tracked down a few of those familiar faces and found out where you may have seen them outside of Pine Valley.

Will Kempe joined the cast for a few weeks beginning in August. He played Dr. Hilliard, and it isn’t the first time Will has taken on a doctor role. In 2006 he played a doctor on “Law & Order: Criminal Intent”. He has also appeared in supernatural television dramas such as “Charmed” and “Angel”.

Cheryl Hulteen’s face is a familiar one around Pine Valley – she has played Adam’s maid “Winnifred” for several years. When he fired her early in the summer, fans were incensed. That is, until Winnie was hired by the Carey women to help care for their kids. Looks like Winnie be remain in Pine Valley for quite a while to come!

Taking care of the kids is no easy task but Kendall and Zach's nanny Rachael, played by Jessalyn Wanlim, makes it look simple. Besides taking on the recurring role of Rachael, you may remember seeing Jessaln in the 2005 flick "The Assassin" (she played a singer). She is currently working on two other films including "My Sassy Girl" and "Late in the Game".

Several fans noticed a new, hunky bartender (and now I'm not talking about Wes!) a few weeks ago. Before Krystal hired Wes, she hired Kyle, who is played by Mark Tallman. We haven't been able to find out much about Mark, but we'll keep you posted as we find out where he'll be seen outside of Pine Valley!

Dr. Delano had quite a bit of bad news for Zach and Kendall a few weeks ago: he is the specialist called in to consult on Spike's case. Now that Spike is out of the hospital and the Slater's are looking at treatments, we may see a bit more of the good doctor. But outside of Pine Valley, we'll probably see actor Charles Stransky, too! That is because he is a very busy actor. He has appeared on several episodes of "Law & Order" and "Law & Order: Criminal Intent" as a supporting cast member. He has also starred in movies such as "Blind Faith" and "Nightmare in the Daylight". He will also star in "Caleb" a made-for-television movie set for release in 2007.

And there you have it! Some familiar faces around Pine Valley just got a little more familiar. We wish all of these supporting cast members the best of luck with their future acting roles - and we look forward to seeing a lot more of you on our favorite soaps!