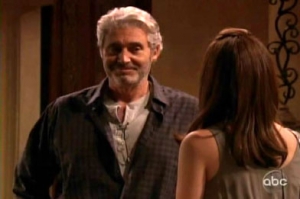 Last week’s AMC seemed to be filled with characters making questionable decisions. That might not actually seem too surprising, but it really stood out for me last week.

A Force To Be Reckoned With.
I’m still really enjoying Caleb. Probably even more so as he mixes it up with more and more of Pine Valley. His living with Bianca now is an obvious contrivance to have him interact with Erica more when she returns. However, as much as he may actually like Bianca, I don’t really see him wanting to share Wildwind with her, no matter how large it is. He’s a loner who doesn’t like people, let alone a young woman and her two little kids. Although, I loved his line to Bianca about Erica sailing off into the sunset with Uncle Jack and his perfect hair. Hilarious.

I hope when Zach briefly returns he interacts with Caleb, as I think they would play off each other well. I still hope one day Adam returns and we can see them spar as well. Because as much as I am anticipating Caleb exacting his revenge on JR for secretly buying the company from him, JR doesn’t hold a candle to his old man.

Welcome to the Family.
Damon was officially adopted last week by Tad, but since he’s not taking his meds, thanks to Liza, he blew off his party and was pretty ungrateful to his father. But here’s my question: since Tad is Damon’s biological father, why does he feel the need to adopt him? Even though I was puzzled over that, I was happy that Liza told Tad his son kissed her. She left out the other bomb, which was that Damon took photos of her when she tried to seduce him in order to keep him away from Colby, but it’s a start in getting all the secrets out there. I don’t know how this will affect his relationship with Liza or Damon, but at least Tad can make some educated decisions based on some of the truth.

Pushover.
I was not impressed with Emma's behavior towards Madison when she tried to replace her Cinderella dress. Emma acted like a spoiled brat when she refused it because it didn't have the special message in it from Greenlee. Ryan totally fed into it when he allowed it and then immediately called Greenlee to help fix the situation. He's going to have a lot on his hands as Emma grows older if he keeps this up.

Dealing with Emma's dress issues wasn't the worst thing to happen to Ryan last week though, as he passed out from an aneurism. It was good to see Greenlee finally wise up with David when she saw him just standing over Ryan's body doing nothing to help. She made it pretty clear after that she was devoted to Ryan and told David to leave her alone. I don't know exactly what will happen with Ryan and who he will or will not remember when he wakes up, but I like terrylee45's idea that Ryan go back to his con man ways. He is one character who is in desperate need of some edge.

First Do No Harm.
Angie's vision issues worsened last week and as she sat outside of Krystal's waiting for Jake to rescue her, I wondered why no one who entered or exited the establishment helped her. She was by the entrance - someone had to see her. The bigger issue though is that since her vision is rapidly decreasing, why is she still working on patients and why isn't Jake insisting she stop? Lucky for Ryan, Jake arrived just in time to take over when Angie was blindly tending to him, but remind me not to go to Pine Valley hospital for treatment any time soon.

Open Your Eyes.
Scott got a call at home and told Annie there were fires to put out at the office. That shouldn't have been too big of a surprise considering neither Scott nor JR ever go there. It seemed to be all a ruse though, as in the next scene he was proposing to his ladylove in front of everyone at the Yacht Club. She accepted of course, but their engagement really makes no sense. I still don't get why he's so trusting of her and he's way too confident that Annie and JR are done. Is he blind? They're always having close, tension filled conversations whenever he walks into a room. Marissa's disgusted reaction to the proposal was funny, but I mostly felt bad for Colby who stumbled upon the scene. I really wish she had a friend to talk to.

That’s it for me this time around. What did you think about last week's AMC? Feel free to share your thoughts below and don’t forget to vote in our poll about who had the biggest lapse in judgment.

All My Children Video Promo: Can...