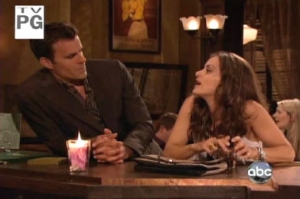 Just when it was getting good. (Soaps.com)

Last week gave us a classic soap opera drunk scene, more insight into Caleb, a convenient plot contrivance and something to think about.

Underserved at Krystal’s.
I really hate the way soaps portray drunkenness. Greenlee had just ordered a drink at Krystal’s when Ryan walked in, yet she was trashed in the very next scene and was falling off her stool. Yeah, it might have been straight liquor, but it was one drink and she hadn’t even had a sip yet when he walked in. Then, she stumbled around her hotel room drunk. She took a nap and was hungover, or still drunk, but as soon as she learned Ryan was in New York she suddenly sobered up and ran around her room booking a flight. Of course she was in the Big Apple in no time – impossibly fresh and clear thinking. I would have rather seen her acting like she was still nauseous or throw up in Ryan’s hotel room (which would have been funny) letting the viewers know she was still feeling the effects of all the alcohol she supposedly consumed. You know, like real people would.

Couple Interrupted.
Just when I was really digging the Caleb/Erica story, Erica left town with Jack. I understand Susan Lucci went on vacation, and she deserves one, but it’s kind of a buzz kill to the momentum that’s been building between the two characters. What do you think? Vote in our poll about Erica’s departure.

I did enjoy seeing another side to Caleb though as he talked about his ex, whom Adam stole from him. Although in one scene he called the woman his wife and the next he said they were to be married. So I’m not sure which one it is. Either way it’s always nice to see a more human side to such a gruff character and it made me like him so much more, especially with how he has softened towards Erica, but without being a total sap. However, I did not like seeing him get all teary eyed as he talked about his lost love. This is not a character who should be crying. That’s not how he’s been portrayed so far, so let’s keep him as a man’s man and keep those tears locked away deep inside.

My only other issue with the story is that if they’re going to link Caleb’s past to Adam, shouldn’t Adam be onscreen? I know David Canary chose not to continue his role as the Chandler patriarch and it’s great they are keeping Adam’s presence alive, but wouldn’t it have more impact if the man who stole Caleb’s love, facilitating his mountain man persona, were actually onscreen? Could that ever possibly happen? Some of you are speculating that Sonja (Caleb’s lost love) is Miguel’s mother and that the boy will turn out to be Caleb’s son and not Adam’s. I have to admit I am not familiar with that storyline, so please feel free to fill me in below.

Grounded.
Putting Bianca on the no fly list with the airlines is certainly one way to keep her in town and awfully convenient. Jack brought her girls across the pond for her though, but still no Reese. David's dig at Bianca about the state of her marriage made me think all is not well for Bianca and the Mrs.

Possibilities.
I think it's silly that Angie isn't telling Jesse about her diminishing eyesight, but her scene with David at Krystal's made me wonder if David will find out and actually help her out. He's been known to surprise us once in awhile and his actually turning into a confidant for a reluctant Angie could be a compelling turn of events and something I might like to see.

Odds and Ends.
Here are a few more quick things that stood out for me last week: Ryan and Madison in New York were kind of cute and they are growing on me a little bit, but I'm just not feeling the heat between them. Liza swiping Damon's ADD medication is sure to have many consequences. And I did not like Annie being attacked by the client just so JR could rush in and save her. They're already establishing a connection, so I wish the writers would find another way for them to bond other than over an attempted rape.

That’s all I got this time around. What did you think about last week's AMC? Feel free to share your thoughts below.

All My Children: Larry Keith Dead At...