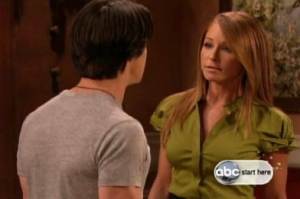 Last week saw a lot of snark, some sexual tension, and even some bonding on AMC.

Smarten Up!
I have a couple of questions regarding Liza. First of all, she found Damon’s phone and saw that the photos of her in her undies were still on it. Why didn’t she just erase them herself instead of waiting to question him about them? And with all the people living in Tad’s house, why would she agree to get frisky there? In his living room of all places? Of course someone is going to walk in on them. Liza lives by herself where they can run around naked all day long without anyone interrupting them – go there.

No Love For the Teens.
It’s hard to buy Colby’s claims of love for Damon. I just don’t feel it or see any real connection between them. Soaps have produced many interesting and engaging teenaged couples, but Damon and Colby are not one of them. Her tantrum just made her look like a spoiled brat. I’m not sure where they are going with these two or with Damon and Liza. I know Damon said he went off his meds and that’s why he kissed Liza, but are we really buying that? What are your thoughts on Tad’s offspring? Tell us in our poll about Damon.

Misplaced Anger.
I’m really enjoying Caleb’s disdainful attitude towards everyone in Pine Valley and feel he is smart to treat them all with skepticism, except for Tad. He didn’t deserve Caleb’s harsh reception since he was the only one who didn’t want anything from him except for him to meet the rest of his family.

Bonding Session.
Annie ran up to the cottage to get JR onboard with buying Cortlandt from Caleb, but found herself pouring her heart out about her past. It was nice to see them act real with each other instead of obnoxiously flirting or threatening each other. They are much more interesting when given some depth and JR is far more intriguing with Annie than with mousy Marissa.

Breath of Fresh Air.
I really like the outdoor set AMC has been using, but I find it hard to believe so many people go to the same part of the park every day. Although, I guess it's not any different than everyone going to the Yacht Club on a daily basis. I'd like to see them use the real outdoors more, but it makes me chuckle every time someone goes to the park. I mean, does Erica really have that much time on her hands that she can take a leisurely stroll through the park each afternoon?

Three's Company.
The thing I'm enjoying most about Madison moving into Frankie and Randi's place is seeing more of Frankie. His rare scene with Randi was sweet, but now she's leaving for Italy which is disappointing. I hope when she returns we get more of them as a couple and it doesn't launch into a story about Frankie falling for Madison.

Mrs. Hayward.
Oh Greenlee, why do you fall for David's song and dance all the time? I don't know how she can justify David making her think he was actually confessing and facing jail time when he was just manipulating the situation to make her love him. Even though she seemed leery, she accepted his explanation and looked over blueprints with him. What she should have done was run out the door. And why doesn’t Ryan want to get involved? This is his chance to truly nail Hayward. At the very least, his overhearing David admit to paying off the SEC agent could be the start of an investigation, which could probably land him in prison for real. Isn't that what all of Pine Valley wants?

A New Regime.
Erica stepped down from Fusion and handed her reins over to Bianca. Greenlee thinks she's won because Erica left, but if Bianca is taking over in her mother's place, is that truly a victory? Either way, it gives Bianca a reason to stay in town, but I have to wonder what that will mean for her when Kendall returns.

That's all I got this time around. What did you think of AMC last week? Feel free to tell us below.

All My Children: Classic Zach and...